Building blocks of the Pt100 sensor

Properties and sources of error

There are two reasons for this:

Industrial platinum resistance thermometers are known as IPRTs, the most widely used of which is the Pt100, which has a resistance of 100 ohms at 0 °C.

Building blocks of the Pt100 sensor

An industrial Pt100 sensor usually comprises three main components: a sensing element or detector, a protective tube and a connection. These can be combined in numerous ways to achieve the desired properties.

Pentronic stocks a wide range of Pt100 wire wounded detectors, (also called resistors) the models varying in size and tolerance class. The diameter of the resistor element ranges between 0.9 and 2.8 mm, and the length between 6 and 50 mm.

There are two principal sizes of industrial sensor for applications in which priority is given to accuracy and stability: 2.8-mm dia. x 25 mm and 1.5-mm dia. x 15 mm. If you need to specify a different length, we will ensure that the diameter is the size best suited to the protective tube being used.

Most manufacturers employ closer tolerances, but
these apply to just one temperature: 0 °C. This means,
for instance, that a tolerance of ± 0.03 °C applying to
“1/10 DIN” (Class B/10) is valid only at 0 °C. For other temperatures, the tolerances will follow the respective slope of curve for Class A or B, depending on which materials have been used. See diagramme to the right.

Thus, the Class-B value cannot be divided by ten: it is impossible to achieve this tolerance curve using the IEC platinum alloy.

Pentronic uses wire-wound Pt100 detectors normally made of Class-A material. Unless we have been given specific instructions to the contrary, during final inspection of the temperature sensor we check the tolerance against the Class-B specification, so that other types of error are accommodated as well. Details of the measured values are included with the delivery. Results from the final inspection testing are available under Test certificates in this web site.

Film resistors are gradually used more often in industrial applications. The test limits are suited to the customer's requirements.

Closer tolerances at other temperatures can only be achieved through calibration that determines the specific properties of the individual sensor.

This is because the quality of platinum specified in IEC 60751 is reduced by the material being an alloy with added palladium - done for compliance with the traditional DIN standard. The alloy gives rise to departures from the ideal curve, necessitating a safety margin corresponding to the slope of curve A or, at worst, of curve B.

Some Japanese and American standards specify a platinum alloy of higher purity, which gives closer tolerances over a wider temperature range. However, these detectors generate a different output signal, which is not compatible with European instruments. For competetive reasons American and Japanese instrument manufacturers usually produce their indicators including the IEC 60751 scale.

Temperature-resistance relationship as per IEC 60751:2008

IEC 60751:2008 describes resistance as a function of the temperature of a Pt100 which relationship was established in 1983. See Tables and polynomials.The amendments made in 1995 have little significance to measurements made in practice. Pentronic will be pleased to explain the effect of these on calibration.

IEC 60751:2008 is not at all changed compared to the 1955 version concerning resistance as a function of temperature. 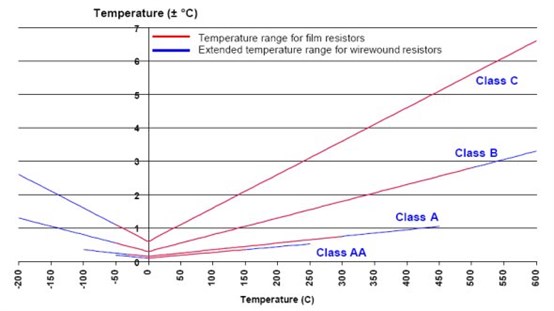 Properties and sources of error

Platinum detectors are highly stable over time but flaws introduced in the design and during manufacture can adversely affect the properties.

Detectors need to be heat treated to homogenize the crystal structure and remove any oxides that may have formed.
Wires secured to the base are stressed during heating: the freer the wires, the smaller the drift of the sensor on temperature changes.

The resistance value changes, eg, if a kink is introduced during manufacture, if the sensor is subjected to impact or vibration, or if it cycles between high and low temperatures.

Pt100 detectors are delicate instruments and need to be treated with the utmost care during manufacture. Impurities can create defects that cannot be detected during final inspection but manifest themselves only after some time in use.

If the tube to the sensor insert is moist or has traces of oil on it, it will adversely affect the insulation of the sensor. At room temperature, this will probably not matter but, at higher temperatures, the contaminants may be vaporized and able to penetrate to the platinum wires.

Shortcomings in the manufacture can also lead to the platinum wires being contaminated by other metals, eg, iron.

Detectors from the “1/10 DIN” range increase the influence of the lead connections. To make allowance for these and other variations, Pentronic usually permits a deviation of 0.05 °C during the final inspection of sensors at 0 °C, which corresponds to “1/6 DIN”.

The surface of platinum becomes oxidized. Since the sensor wires are thin (approximately 0.02 mm), the coating of oxide will have a measurable effect on the resistance.

In normal environments, the process is a slow one and the effects can usually be minimized through regular calibration.

The IEC recommends that different colour codes be used for Pt100 leads, in order to ease connection work. Pentronic uses the recommended codes whenever possible. See the picture and comments in the right-hand column.

Depending on market demand probably cable manufacturers will follow the IEC colour recommendations sooner or later.

We can also supply cable of the same colour code for additional runs. See illustrations in the righthand column.

What the Pt100 indicator really measures

Resistances included in the measured value for different
connections. Calibration of 2-wire and 3-wire connections
assumes that the lead resistances and the differences in the
resistances in the current winding are known.

Typical error sources and ranges for the Pt100 detector.
The table does not include any allowance for environmental
effects, such as contamination by metal migration, platinum
oxides and the like.

The following table describes briefly the main differences between thermocouples and Pt100s in general terms: